The first time I laid eyes on Mont Saint Michel was in a picture on the internet, I knew I had to go there. I began dreaming about being on Mont St Michel, wandering the streets alone at night, staring out to sea from the ramparts, getting lost in the ancient Abbey.  Although my  European holiday plan did not allow the time to fit in Mont St Michel, I practically wished my visit into being. It wasn’t easy.  In fact, my schedule was downright crazy, but when you fixate on getting to a destination, you just make it work, right?

About a year later I finally made it. I had 1.5 days on the Mont and one night alone – an experience I will never forget. It took some planning, given most of the French portion of my trip was planned and booked for the other side of France in the Alsace region.  But I was also in Paris for a couple of days.  But then again, surely only a crazy person would go to Paris for a few days and spend all those days getting to Mont St Michel and back?  You decide.

Before leaving Australia, I planned my trip carefully in the midst of train strikes, booking my train tickets online and just hoping those trains wouldn’t get cancelled. In my tight schedule there was no room for anything to go even slightly off kilter or it would have a horrible domino effect. I was so determined to get to the Mont, that I booked two trains there at different times.  I figured if one got cancelled, I still had another chance. I felt terribly guilty as it seemed extravagant, but the thought of going all the way there and then not being able to get to the Mont due to train strikes was unbearable.  All I knew was that I had to get there, absolutely had too. 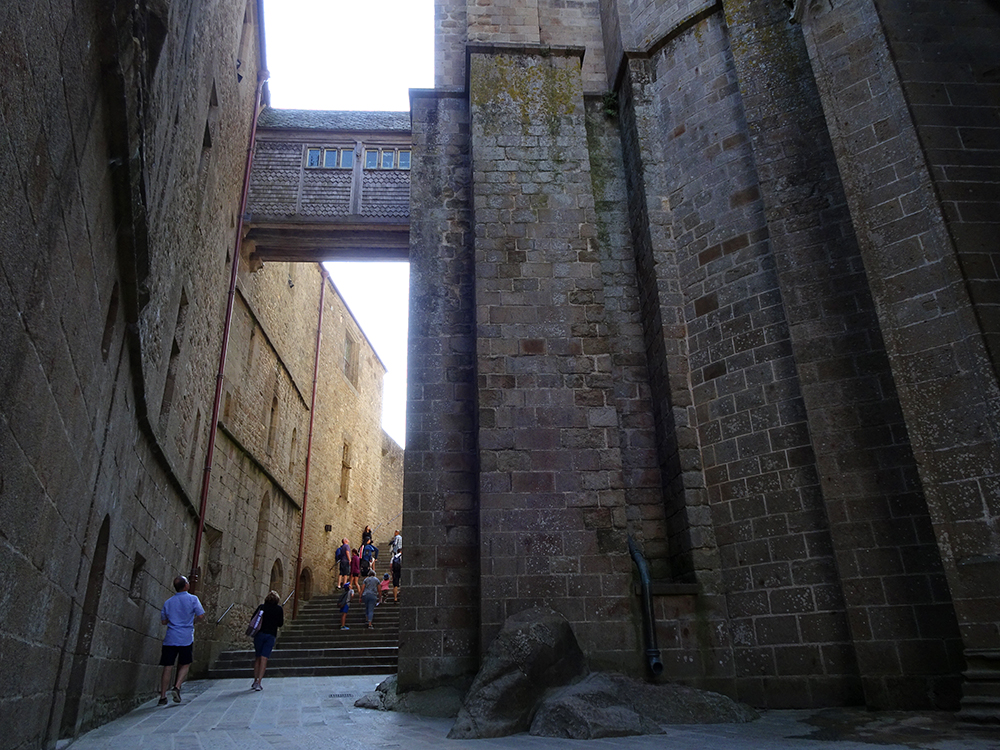 If you’ve ever read about the Mont, you’ll know that you’d have to be a bit silly to take a suitcase, given all those pesky stairs. Everything I’d ever read strongly recommended leaving suitcases behind.  So I left my suitcase in Paris (yes, I paid for a cheap hotel room to house my case for the night, I felt wasteful doing it, but I knew I would be on a super tight schedule with no time to stuff around. In hindsight, I should have booked my Paris room before and after the Mont and asked the hotel to mind my case for one night. But when you plan to go from the Mont, to Paris, to Versailles and back to Paris in a day, you really don’t have a spare minute to muck about.

Back to planning: Everything I read recommended a day tour from Paris which only gives you a few hours on the Mont, not enough!  Even the 2-3 day tours only gave you 3-5 hours on the Mont when it is thick with people as they spent the rest of the time visiting other places. What is a person to do?   The thought of missing out on an overnight stay was keeping me up at night.  So, given my desperation to experience the Mont  in a deeper way, I decided to go for the option of doing the trip on my own from Paris to Mont Saint Michel.  Yes, it was rushed, crazy, a little inconvenient and exhausting, but it was also a once in a lifetime experience, exhilarating, magical, incredible and unforgettable. I got to experience this unique island during the daytime thick with crowds, during the evening when the dark streets were almost empty and during the early hours of the morning before sunset when there was not a soul around, besides myself, and that, was the most unforgettable bit of all. 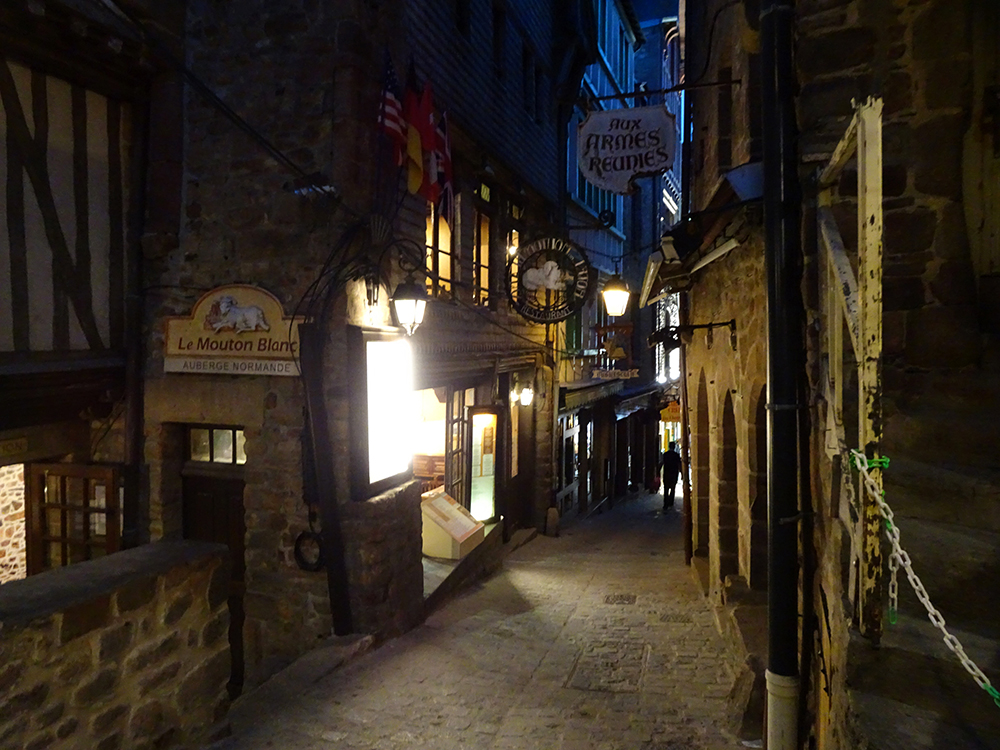 Walking around at night around 9pm by myself on the streets of the Mont and walkways was not scary as I’d expected , as there were a couple of people still around (not many), but enough that I didn’t feel completely isolated. Sure, you can certainly get a feel for the Mont in half a day if you go flat out, but my favourite time on the island was in the early hours of the morning from 4.30am – 9.30am.  Getting up at 4.30am before the sunrise while the entire island was asleep, and wandering up to the bottom of the abbey entrance in the dark alone was terrifying, but exhilarating. The island was completely quiet, not a sound to be heard except my footsteps. Approaching the base of the abbey I felt fear.  The history of the place, thoughts of prison ghosts, darkness and shadows on the ancient buildings along with the deafening silence had all the hairs on my body standing upright. I literally had to force myself up to the bottom of the abbey entrance stairs, and push past the fear, as it is something I wanted to experience alone. You can’t go any further than the base of the entrance as it closed at that hour. I went as far as I could, stood and looked all around me, so spooky in the dark at that time.  I then jumpily made my way back down to catch my breath.  My time up there in the darkness was brief but special and I am so very glad for pushing through my fear to experience that moment. 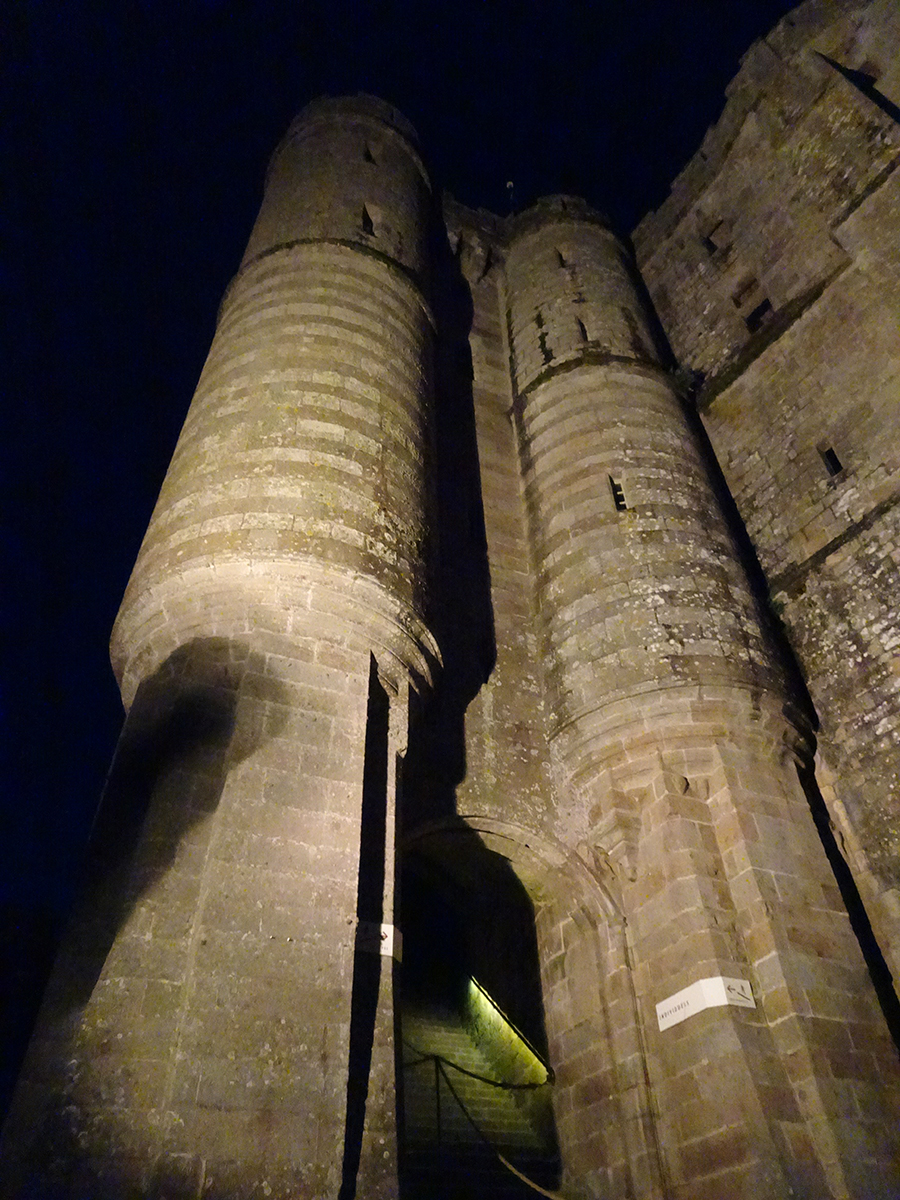 Wandering the ramparts and walking around the entire Mont while you still have it to yourself while the sun is rising is an experience I can highly recommend. It is quiet  contemplation time and a world away from the streets that will be teeming with people after 10am. It is a completely different feel. 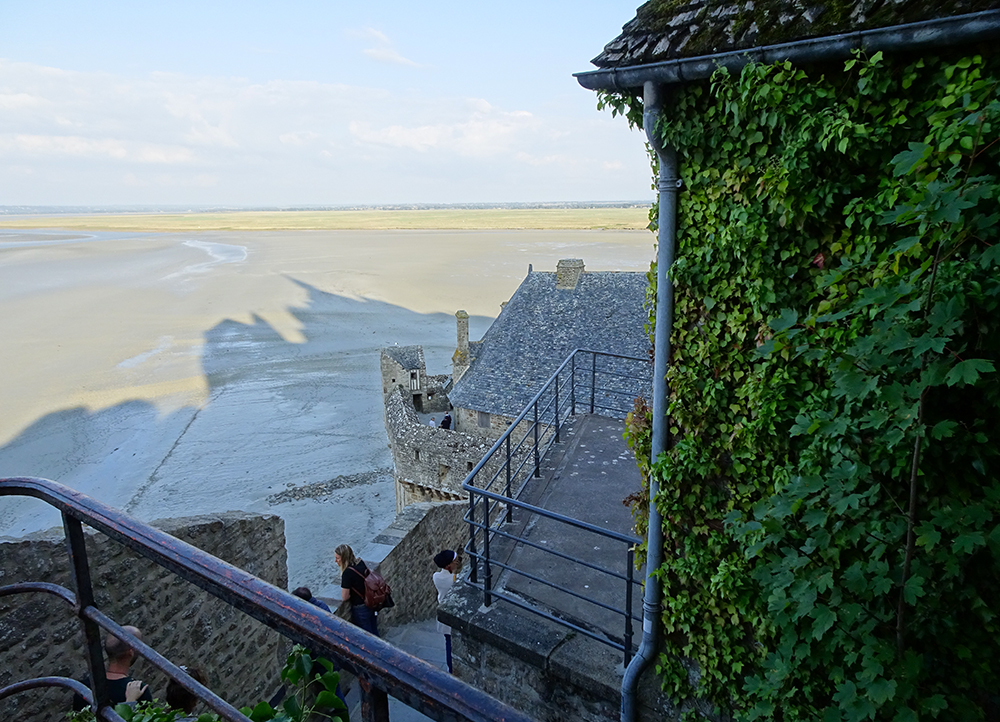 I then booked my accommodation directly on the hotel site La Vieille Auberge, which despite the terrible reviews, was actually fantastic. Mind you, I did book a room with a terrace and beautiful bay view. The room was simple, but it was comfortable and perfectly positioned with an incredible view. I loved it and would book it again in a flash. The extra few dollars for a balcony and sea view was worth it.   Yes, I would stay there again in a sea view room with a terrace, absolutely!  Although, I must confess, walking around the Mont all day and all night is so intoxicating, the only time you’ll spend in your room is to sleep. 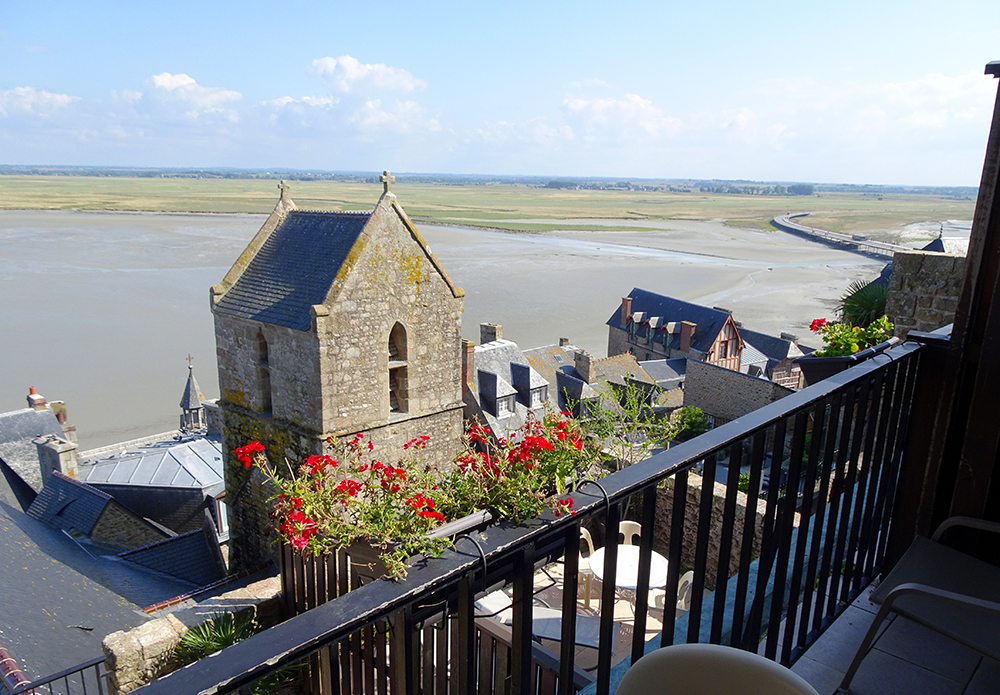 Check to see if the hotel you are booking is actually on the Mont or just off it.  For what its worth, my view is that staying on the Mont is a fantastic experience, especially if you want to explore late into the night and in the early hours of the morning when not a soul is around.  With some of the hotels, including La Vieille Auberge, you may have to pick up the key at a restaurant and a staff member takes you to your room which may be somewhere on its own.  Oh, and don’t bring any luggage other than a back pack. There are endless stairs all over the Mont.  I solved this problem by booking a super inexpensive but decent hotel room in Paris, and left my luggage there for 2 days.  Yes, the costs added up, but I had such limited time, I had to make it as easy and convenient as possible for myself.  And yes, I would do that again, because I live in Australia, and don’t expect to be holidaying at the Mont regularly, if you know what I mean….. this was one of those places and experiences I will treasure forever. 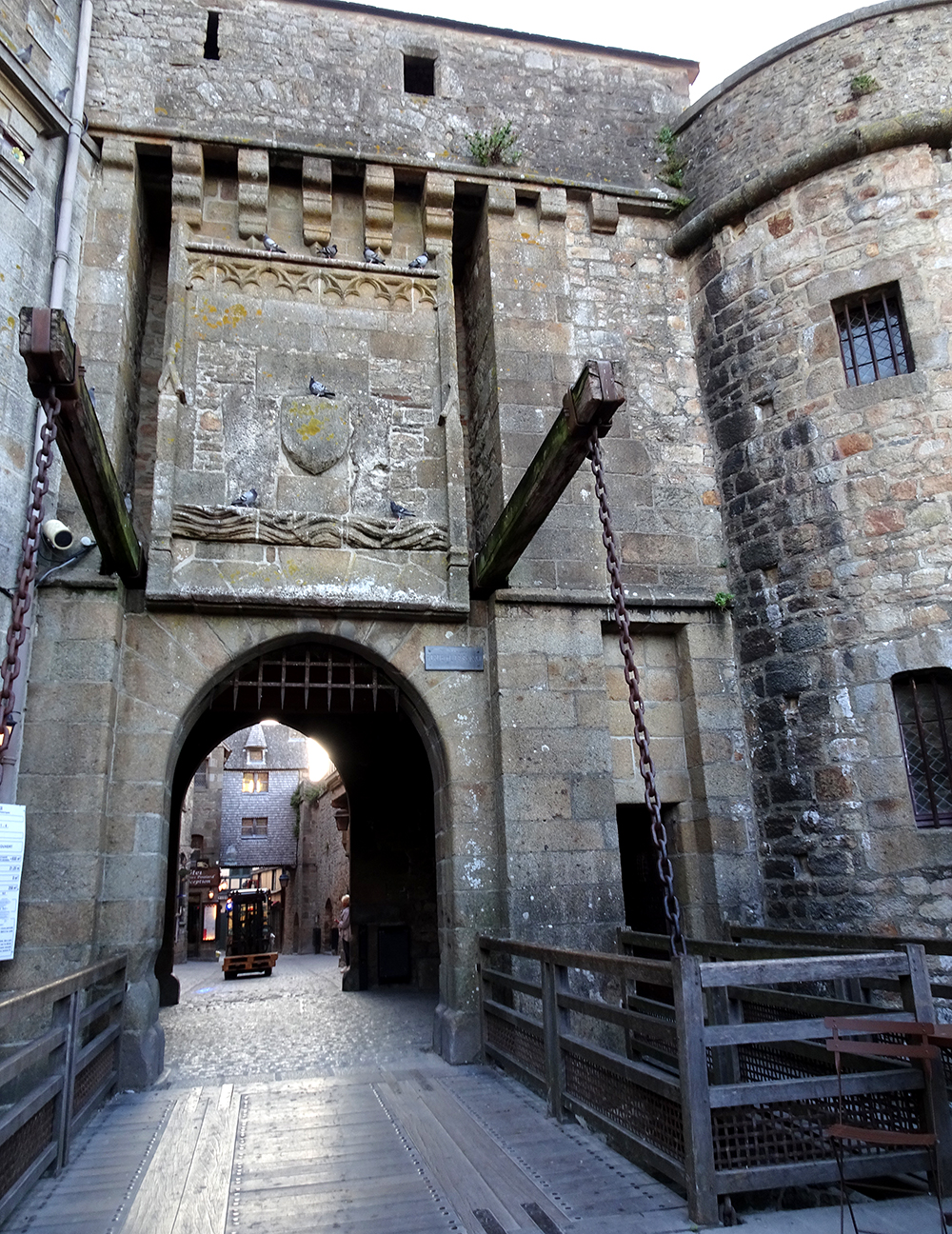 Months before I went to France, I started searching for how to get from Paris to Mont Saint Michel on my own.  People talked about a bus, but there were no current timetables or information, only timetables and information for previous years. I even wrote to the relevant bus lines asking for the timetables for late August/early September. But they couldn’t give me anything. In the end, I had to wait until about a few weeks beforehand until the new timetables were released and I could book. Meanwhile, train fares were going up before my eyes, so I decided I really needed to book the train fare to and from Rennes and take my chances that a bus would be running from Rennes to the Mont and that it would somehow work out.  The key was, to check the previous years bus time table (which will often remain the same) and take my cues from that.  I knew the buses had to line up with the train, so I compared the previous years train/autocar timetable (autocar was the bus in this instance) and figured out the train times that matched up.

I used the online booking site of www.trainline.eu (which soon after I believe linked to trainline.com), and booked the train from Paris to Rennes one day, and from Rennes to Paris the next day.

Here is how I got from Paris to Mont Saint Michel and back again:

After getting back to Paris at 1.04pm I was exhausted. But….

But I was leaving for Alsace first thing in the morning and I still hadn’t seen Versaille which was on my ‘got to see it’ list. I had purchased my ticket online from Australia weeks before to save time, because I knew I would be short on it. So I rushed back to my Paris hotel to drop off my backpack and then headed to Versailles on a few trains, but that is a whole other story. Needless to say, I burned the candle at both ends and collapsed on my bed fully clothed about 7.30pm that night for a quick rest before dinner.  I was so tired though, that I didn’t even wake up until the next morning, so I missed dinner on my last night in Paris. I never fall asleep at 7.30pm, never! So I knew my body had to have been a total train-wreck for this to occur. I think I was still jetlagged before I even left for the Mont (coming from Australia), so no wonder.   If I had my time again, I would spend a full second day on the Mont, that would have been ideal.

While I was glad to make it to Versailles, it is difficult to enjoy it when I was so tired and in pain, however, having said that, I am very glad I didn’t skip it. But it is best to have a a full day there if that is possible. Trying to do Versailles in a quarter of a day is insane and knew that in advance (but it was that or nothing) I do not recommend it unless you are desperate to see it and have no choice – that was me at the time. Although I am very glad I visited Versailles which is amazing, Mont Saint Michel was by far the highlight.  And here is a random comment for you…… I found the castles of King Ludwig even more intriguing and beautiful than Versailles – but that is a personal preference.

Anyway, I could ramble on about travel forever, but I’ll do us all a favour and stop right here, for now… 🙂